Today I'm hosting the talented Paul Anthony Shortt, a fellow WiDo author. He just released the third book in his trilogy, Memory War, and agreed to sit for an interview, electronically speaking.


Christauna:  Hi there, Paul, tell us a little bit about yourself. Where are you from?

Paul: Hi Christauna, thanks for having me.
I live in Ireland, with my family. We've got three little girls and a pair of very energetic dogs so it's a busy household. Sometimes it can be tricky finding time to write.

C: Boy do I understand that! So this is the third book in your trilogy?

P: Yes. Originally the series was going to be 6 books, but it came to getting the second book ready, I realised that the series would be much stronger and more focused if I reduced the length.

C: How is writing the conclusion of a series different than writing a first novel or even a second one? I only ask because I'm plowing through revisions on the second book in my series currently and have only just started writing the third. So spill. I'm dying to know.

P: Endings are a big deal. For me, there's no more important part of a story. I've seen a lot of series, whether they be books, tv shows, or movies, where the series ended on a flat note, and it's so disappointing. I wanted to make sure this book did everything I've always wanted to see in an ending. I had to bring everything I'd learned in my time working on the trilogy; pull out all the stops and make it as exciting as possible, while still keeping the story grounded in what had come before, and making sure the end was satisfying and didn't leave too many loose strings.

C: I couldn't agree more. Now I'm even more worried about concluding my series the right way. Anyhoo... tell us about Memory War.

P: Memory War sees the conclusion of Nathan Shepherd's story, something that's been brewing in my head for years now. After realising his past as a reincarnated champion of good, and giving hope back to New York, Nathan now has to face his greatest challenge. His relationship with Elena, his former lover, is strained to breaking point because of his betrayal in a past life, and his nemesis, Athamar, returns to New York to wage war. Nathan has to rally his allies, come to terms with his mistakes, and accept the possibility that this lifetime may well end with blood and pain.

C: What inspired this story?

P: That's kind of hard to say for certain. As a whole, the idea for the series came from wondering what would happen if, in a world of the supernatural, ordinary humans had an edge of their own against monsters? I was tired of seeing vampires and wizards as the primary heroes, with regular people relegated to supporting roles. That's where the reborn came from, the idea that everyday people can remember past lives, and if they practice, can draw strength and knowledge from the memories. Memory War, itself, came from simply wanting to present the most explosive, satisfying conclusion I could offer.

C: What is your favorite thing about being an author?

P: Getting to lose myself in a story, and indulge my childish side as I soak up lessons in story structure, character development, and narrative from as many sources as I can, from mythology to video games to the latest animated kids' movie.

C: Tell us about your writing process.

P: I'm a reluctant plotter. I usually like to dive into a story and see what ideas come to me, picking and choosing the ones I like. Of course for sequels this becomes trickier, as I have to take into account what's gone before. I get my best ideas while listening to music. I'll imagine scenes happening along with the music, most often coming up with the ending first, and then craft the story and characters around that. When I get to around the halfway point in a draft, I then start to determine how to bring the story to a finish.

C: Last question. Have you ever patterned a character after a person in order to honor that person... or perhaps to get revenge? No, don't answer that... hee hee...

P: Definitely not to get revenge. That's a risky proposition for any author. But I did base Nathan's father, Mike Shepherd, off my own dad. While the two have different backgrounds and traits, they both have the same level-headed, pragmatic idealism. Both wanted their sons to be the best men they could be, and passed on valuable lessons about how to approach life. Both would fiercely protect their loved ones from a threat.

P: Thank you again for having me. I hope you, and everyone else, enjoy the new book!

C: It was a pleasure! Thanks for being here.

You're going to want to get the first two in the series first, Locked Within (book 1), Silent Oath (book 2). Oh and don't forget the prequel to Silent Oath, Taking Sides. All are available on Amazon or wherever books are sold. 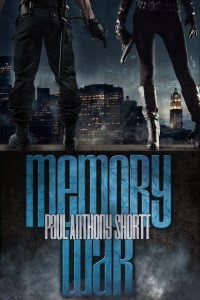 War is coming to New York. Nathan Shepherd’s growing band of followers is dedicated to protecting the city, but they now face their greatest threat. Athamar returns, plunging the city into chaos. Uniting the forces of darkness against Nathan and his allies, Athamar strives to discover a secret hidden for thousands of years. A secret lost to Nathan’s memories. Something so dangerous, even the gods themselves fear it. Nathan and Elena were once the greatest of heroes, champions against evil. Now, haunted by Nathan’s past-life betrayal, they must work together and brave the pain of long-buried lifetimes. Somewhere, locked within their former incarnations, lies the key to stopping Athamar, an enemy who has hunted them from one incarnation to the next. As the city burns and innocents suffer, as heroes fall and hope dies, Nathan and Elena face their final battle, a battle where legends will be reborn.

A child at heart who turned to writing and roleplaying games when there simply weren't enough action figures to play out the stories he wanted, Paul Anthony Shortt has been writing all his life.

Growing up surrounded by music, film and theatre gave him a deep love of all forms of storytelling, each teaching him something new he could use. When not playing with the people in his head, he enjoys cooking and regular meet-ups with his gaming group.

He lives in Ireland with his wife Jen and their dogs, Pepper and Jasper. Their first child, Conor William Henry Shortt, was born on July 11th, 2011. He passed away three days later, but brought love and joy into their lives and those of their friends.

The following year, Jen gave birth to twins, Amy and Erica. Their fourth child, Olivia, was born in January, 2014.
Posted by Unknown at 7:52 AM